The Mountain Professionals Everest 2019 team is now back down to Base Camp after a run up on the mountain over the past days. The team did really well with the first climb up through the Khumbu Icefall on the way to camp one, making the trip up in 7 hours, which we would say is a pretty standard time if not a little fast. This is great news for the time being with regards to forward looking to the higher movements to come later. We have learned over the years that one single climb between camps does not dictate how a climber will do on the overall climb. Some people have a bad day, feel tired, etc, and may take an extended amount of time to make a movement between these camps. So this is to say that we may or may not find it harder above, but it is always a good feeling as a team to move very efficiently and not have any issues with the technical side of the rope work. Great job to the team!

Observations on the route to Camp One this year from Ryan Waters; The icefall is in relatively good shape this season, the route is efficient and direct with very few ladders, which makes things move along pretty smoothly. It is almost an identical route as last season, with many of the same features still in place, but seemingly lower and rounded as opposed to huge jagged seracs to navigate. There is only one moderately challenging vertical ladder section near the last hour of the icefall towards climbers left, just before you want to make efficient time rounding the left hand side of the route. So far this has been the only ladder section to produce any bottlenecks but they have been very minor since the first very large wave of Sherpas all got there at the same time. With teams spreading out, it is now moving pretty smoothly here, the Mtn Pros team descended this morning from C1 and there was not a single person at this ladder section.

The amount of horizontal ladders is quite minimal and basically all of them are a single ladder crossing, thus far in the season, and this will change as the weeks progress. Some of these will need to be extended or possibly moved but for now, it is strikingly few, single length, crossings to overcome. Rounding the left side exposed section before base camp has a fairly smooth and efficient meander through low end short steps, and does not go way left as it has in some past years. The rest of the way into C1 is the usual ups and downs that tend to be the last slap in the face before reaching the tents, but not any change from years past.

Observations on the route to Camp Two this year; The route follows a very similar path as previous years, the large and challenging vertical ladder to ice section of 2018 is in the same place, however this season it is much more mellow, and shorter in vertical meters, it does not pose any real slow down point this season. The usual meandering beyond is the same, with a few short one section horizontal ladders, and additional 5 meter ice steps that are fairly easy to Jumar up. This brings you to the long slow walk up the trail to C2 same as years past.

It is still a bit early in the season with even some climbers now just arriving, but even with the high number of permits issued this year, it has seemed relatively calm and quiet. No long lines and a nicely spaced out relaxed camp one has been established by mostly foreign guide companies. More from the team coming soon. 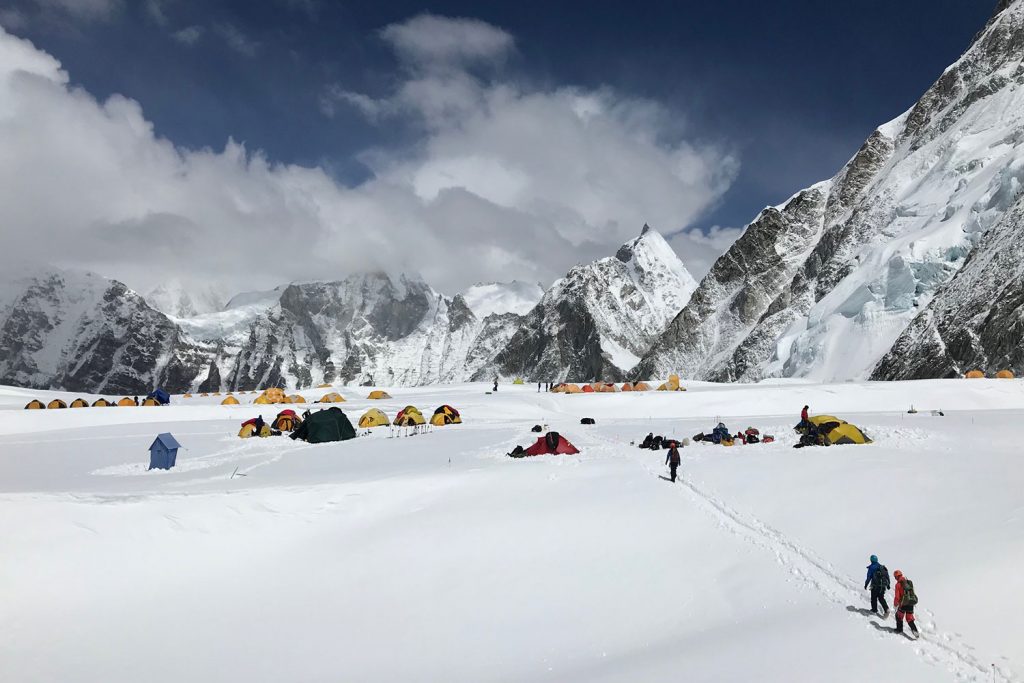